This easy homemade naan is made with sourdough starter and simple ingredients and cooks on the stovetop in minutes. Serve it with your favorite Indian dishes or use it for sandwiches, naan pizza, or enjoy it as a delicious snack on its own. This is an easy way to use your sourdough starter and doesn't require turning on the oven!

I've been playing around with ways to use my sourdough starter that don't involve turning on the oven and this relatively easy sourdough naan bread ticks all the boxes for me. It's delicious, easy to prep, cooks quickly, has tons of uses and freezes well - I mean, what more could you ask for in a sourdough bread recipe?

If you've ever eaten at Indian restaurants you've probably tried naan, which is a delicious buttery Indian flatbread and a staple of Indian food traditionally cooked in a tandoor, or clay oven. The dough is usually made with plain yogurt and ghee and is leavened with yeast. It can be stuffed, buttered, or served plain, and accompanies saucy dishes to sop up the best part of any dish: the gravy.

When researching traditional naan recipes I watched Manjula's Kitchen's recipe video for Tawa Naan to study the ingredients and process as a jumping-off point. Their videos are wonderful, do give them a watch. A tawa is a flat or concave griddle-like pan used traditionally by home cooks throughout the Indian subcontinent.

Since we don't have a tandoor oven or a tawa the next best baking vessel for naan, in my opinion, is a cast-iron skillet and a lid. I love cast-iron cookware for baking bread in my oven and for cooking tortillas, so it seemed like the logical choice for cooking these flatbreads. A cast iron griddle would work too, but you would need to use a domed lid to cover the naan as they cook.

I found that using a lid for the first half of cooking helps hold in the steam and create large air bubbles, which make a light and airy flatbread that's soft and pliable. Any pot or pan lid that is roughly the same size as your skillet should work fine. The lid doesn't have to be cast iron. I used a stainless steel lid to one of our large stockpots.

Sourdough Starter: Use recently fed, bubbly and fully active sourdough starter to make sourdough naan. I feed my starter at 100% hydration which means equal amounts by weight of four and water. Learn how to make your own sourdough starter with my easy tutorial. This recipe relies on active starter to leaven the dough (make it rise). If you want to use sourdough starter discard and make sourdough discard naan then you will need to add another leavening agent like commercial yeast or baking powder to create airy bubbles in the flatbread.

All-Purpose Flour: All-purpose flour has less protein than bread flour and makes a softer and more tender crumb structure, which is perfect for these soft tender naan. Try swapping in whole wheat flour or spelt flour for a portion of the white flour to make a whole grain version.

Milk or Yogurt: Use diary or non-dairy milk is this recipe as you prefer. Regular whole milk or reduced fat milk is fine. Or use plain yogurt and omit the vinegar. Greek yogurt (or sour cream) is too thick but if it's all you have on hand just thin it out with some milk until it is the consistency of plain yogurt. For vegan options, use unsweetened plant-based milks like soy milk, oat milk or almond milk.

Olive Oil or Ghee: Traditionally, ghee is used as the fat in naan dough. Ghee is clarified butter or butter that has the milk solids removed. Olive oil works perfectly as a vegan-friendly option.

Vinegar: A splash of apple cider vinegar will sour the milk and add a slight tang to the sourdough naan dough. It also helps to soften dough and keeps the naan soft and tender.

Salt: I always use kosher salt in my baking and bread recipes and it is what I used in the recipe. Salt is necessary to bring out the flavors of bread and should not be left out.

How to Make Sourdough Naan

The dough comest together easily in a stand mixer. Simply combine everything except the flour with a fork to break up the starter. Then add the flour and mix the dough on the stand mixer's lowest speed until a soft tacky dough forms after about 8 minutes. This dough can also be mixed by hand and kneaded by hand for 8-10 minutes.

Cover the bowl with a damp tea towel, beeswax wrap or plastic wrap and let it rise at room temperature until it has nearly doubled in volume. This could take a few hours in warm climates and up to 12 hours or longer is cold climates.

First preheat a large cast iron skillet over medium-low heat on the stovetop. Divide the dough into 16 equal portions and dust them with flour. Roll each piece out into an oblong oval shape. Place the rolled out dough pieces on a floured sheet pan and cover it with a damp cloth to keep the dough from drying out.

Lightly oil the preheated skillet and cook the naan two at a time. Place two pieces of dough into the skillet and cover it with a lid. Cook them for 2-3 minutes then remove the lid and flip the naan over. Cook the other side uncovered for another 2-3 minutes. Adjust the heat level as needed. The cooked naan should have browned spots and still be soft and pliable. Brush the finished naan with olive oil and cover them with clean dish towel on a plate to keep them warm and soft while you cook the rest. Repeat until all of the naan are cooked.

Naan will keep for 3-4 days in a sealed bag or airtight container at room temperature, but the best way to store naan is to freeze it. Freezing bread keeps it from going stale and can be easily reheated in a toaster or oven when you're ready to use it.

To freeze cooked naan, simply store them in a freezer bag and freeze them for up to 6 months. Defrost and warm them in a toaster as needed.

Can you make vegan sourdough naan?

Yes, this recipe is already vegan-friendly. Just use non-dairy milk and olive oil in the recipe to make vegan naan.

Can you make gluten-free sourdough naan?

Can you freeze naan?

Yes, in fact, freezing naan is my preferred way to store it. Store cooked naan in freezer bags and freeze them for up to 6 months. Simply reheat the flatbreads in a toaster or oven before serving them.

Can you make naan with out yogurt?

Yes, instead of yogurt use milk soured with vinegar. You can also use sour cream thinned out with a bit of milk or you can even use cultured buttermilk or kefir. 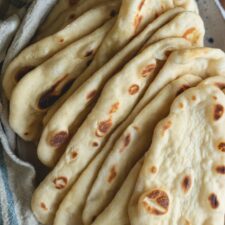 This sourdough skillet naan is a great way to use your sourdough starter without turning on the oven. The resulting flatbread is soft and buttery and makes the perfect vessel for pretty much anything. Serve it with curries, soups, or stews, as sandwich bread, or eat it hot with butter straight from the skillet.
5 from 1 vote
Print Pin Rate
Course: Bread
Cuisine: Indian
Keyword: naan, flatbread, sourdough
Prep Time: 30 minutes
Cook Time: 20 minutes
Resting Time: 4 hours
Total Time: 4 hours 50 minutes
Servings: 16 servings
Calories: 130kcal
Author: Kaity Farrell