It just hit me yesterday that St. Patrick's Day is on Tuesday. Every year I make a version of vegan Irish soda bread in celebration of our Irish roots. Irish soda bread is like a giant scone to me and I love it with my morning tea. We had some homemade maple citrus marmalade and homemade soy labneh in the fridge to top the soda bread with this morning. Labneh is so useful! Here it replaces clotted cream and is so good dolloped over the sweet marmalade and crumbly soda bread.

Since I've cut back on gluten and processed wheat recently I decided to dip my toes back into baking by using ancient grains like spelt and einkorn, both of which are heirloom wheat grains. These heirloom varieties have not been manipulated over the centuries to increase their gluten as commercial wheat has been. They still contain gluten but their internal makeup is the same as that of the wheat our ancestors ate way back when.

Traditional Irish soda bread is made with buttermilk, which I've replaced with coconut milk mixed with a little apple cider vinegar. It's thick and creamy and the vinegar gives it a tangy taste like that of buttermilk.

This spelt version is a bit denser than last years version, which was made with a mixture of white and whole wheat flour. The coconut "buttermilk" ups the richness factor and makes up for the slightly more dense texture. I suggest using coconut milk no matter which flours you end up choosing for your loaves.

Again this year, these loaves are studded with dried currants and caraway seeds, a classic combo I will not alter, ever. Some things just shouldn't be changed. 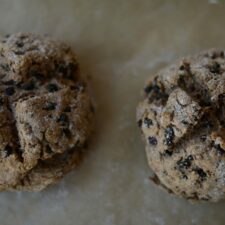