This simple vegan kale and potato gratin recipe is the perfect comfort food dish loaded with layered potatoes, sautéed onions, roasted garlic and kale in a creamy vegan béchamel sauce. Serve it as a a main course with a side salad or as vegan side dish during the holiday season at Thanksgiving or other gatherings.

We love potatoes in our house and I'm always trying to think of new, interesting ways to cook them like my Roasted Rosemary Hasselback Fingerling Potatoes. I came up with this creamy layered kale and potato casserole yesterday and it was a big hit. It's similar to scalloped potatoes or potatoes au gratin but a little less fussy. My son kept asking for more! And I was able to sneak in some greens. The flavors of this easy recipe are so comforting and are perfect to serve for a family dinner, yet this dish is special enough to serve at holidays and gatherings.

Potatoes: The best kind of potatoes for this recipe are starchy potatoes like Yukon gold or russet potatoes because they have a fluffy and creamy texture when baked. Avoid using waxy potatoes like red new potatoes, which are wet and dense and are better suited for boiling or making potato salads.

Kale: Sautéed kale adds nice flavor and color to this casserole and the benefits of healthy greens. Use any type of kale or other hearty green such as Swiss chard or collard greens.

Onions: Caramelized onions add a an earthy sweetness to the casserole and onions go so well with potatoes. Use any type of onions like sweet onions, yellow onions or red onions.

Garlic: Roasted garlic adds a wonderful nutty and savory flavor that goes so well with the potatoes and creamy sauce. Its a match made in heaven! Make sure to leave the skins on the garlic cloves so they don't burn!

Non-Dairy Milk: Use a vegan unsweetened milk such as soy milk or almond milk to create the creamy vegan béchamel sauce.

Flour: A bit of flour is used to thicken the béchamel sauce. Use plain white all-purpose flour or whole wheat flour. To make this gluten-free use rice flour instead. You can also use corn starch to thicken the sauce instead of making a roux. To do this mix a little bit of the milk with the cornstarch first then add that mixture to the rest of the milk and cook, stirring constantly until it thickens.

Nutritional Yeast: Nutritional yeast add a cheesy flavor to the vegan cream sauce and creates a crispy baked top on the gratin.

Wine: Use red or white wine to deglaze the kale-onion mixture and add a touch of acidity to the flavor profile. Or use water mixed with a splash of apple cider vinegar or aged sherry vinegar to deglaze the pan instead.

Olive oil: The vegetables are cooked in extra virgin olive oil for flavor. It's the default oil I cook with everyday. The flour is first cooked with a bit of olive oil to create a roux which thickens the cream sauce.

Nutmeg: A pinch of grated nutmeg is traditionally added to béchamel and I personally love the flavor it adds. You can leave it out if you prefer.

How to Make a Kale and Potato Bake

First slice the potatoes into roughly ¼ inch thick rounds. I like to leave the skins on the potatoes because they are full of nutrition but you can peel them first if you like. Add the potato slices to a large bowl and coat them with olive oil, kosher salt and black pepper. Arrange on a baking sheet in a single even layer. Tuck whole garlic cloves with their skins left on into the potato slices and roast everything in a preheated oven until the just start to crisp and turn brown. This step helps ensure the potatoes will be cooked through. Roasting them adds more flavor to the dish, as do the roasted garlic cloves.

While the potatoes are baking, thinly slice the onions and cut the kale leaves into ribbons by stacking them and rolling up first. Preheat a large skillet or saucepan over medium heat. Add olive oil to the hot pan followed by the onion slices. Sauté the onions until they are nicely browned. Add the kale and season with a pinch of salt and black pepper. Deglaze the skillet with wine and let the liquid cook off. Transfer the mixture to a bowl and set it aside until you're ready to assemble the casserole.

In the same saucepan or skillet (no need to wash it first) make a roux with olive oil and flour by whisking them together over medium heat until lightly browned. Then slowly whisk in the milk to avoid any lumps. Keep whisking the sauce over medium heat until it thickens then whisk in nutritional yeast, salt and pepper to taste, nutmeg and chopped parsley. Set the sauce aside until assembly.

Step 4: Assemble and bake the kale and potato casserole

Layer half of the potato slices into the bottom of a casserole dish, baking dish or pie plate. Spoon half of the cream sauce over the layer of potatoes and layer all of the kale-onion mixture over it. Squeeze the roasted garlic cloves out of their skins and space them out over the kale mixture. Layer the other half of the potatoes followed by the rest of the béchamel sauce as the top layer. Sprinkle more nutritional yeast and chopped parsley over the cream sauce layer to make a golden crust as it bakes.

Cover the casserole dish with aluminum foil for the first part of the bake time. Then remove it and continue to bake until top crust is golden brown. Serve the creamy vegan potato and kale bake hot from oven.

Store leftovers in an airtight container and refrigerate them for up to 3-4 days. Reheat to serve. The assembled and unbaked casserole can be frozen for up to 3 months before baking it. If you're planning to make this ahead and freeze it then assemble it in a disposable oven safe baking dish. Store it in a freezer safe bag or vacuum sealed bag and freeze it. Bake it straight from the freezer but increase the total time to 45 minutes to 1 hour or until the center is cooked through and hot.

What potatoes are best for vegan scalloped potatoes?

Starchy and fluffy potatoes with a creamy texture when baked are perfect for making au gratins or scalloped potatoes. Use common varieties such as Yukon gold, russet or Idaho potatoes or any starchy heirloom varieties.

What add-ins work well for this recipe?

For a richer sauce, add cheese to the béchamel to make a cheese sauce. Use vegan cheese to keep it vegan. For a crispier topping sprinkle bread crumbs over the top of the casserole before baking. Add herbs for more flavor like thyme or rosemary. Use sweet potatoes in place of regular potatoes to make a sweet potato casserole.

How do you make a gluten free cream sauce?

To make a gluten-free béchamel sauce replace wheat four with rice flour as the sauce thickener. 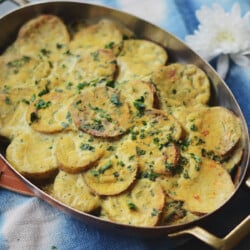