The island has been hit with its fair share of cold this month, not that I'm complaining. We've had some really amazing natural sightings and phenomenons along with the cold. Unless you live under a rock, you probably have heard about the "Slurpee" waves which formed on the south shore of the island last week and the photos of which have since gone viral on the interwebs and news outlets. I was lucky enough to happen to catch sight of the frozen slo-mo surf in person, all by chance. Iley had fallen asleep in the car on our way to town and I decided to change course and head to the beach, and boy, what a good choice that was. Nature never ceases to impress and amaze me.

There is something to be said for the quietness and stillness which comes with the harshness of winter. Last night, with our bellies full from feasting on this humble galette, we headed out to catch the sun tucking in for the night and were dazzled by an array of wildlife sightings at each stop we made. A seal sunbathing atop a large floating chunk of ice in the surf. A red hawk warming himself by the setting sun in a barren tree next to the pond. He had no bother with us as we crept up close to the trunk and watched him from a short distance. Across the street, a pair of swans were dipping their beaks into the still water, which reflected the bright blue sky above. It was one of those mind-clearing evenings, which only nature seems to provide, and which puts everything into perspective. I am so grateful for this life.

The frigid temperatures outside beckon us to gather around the table to share a warm and hearty dish this time of year. Thinking outside my normal parameters of pastry crusts, I dreamt up a savory layered vegetable galette wrapped in an overlapping crust of thinly sliced Yukon gold potatoes. My original plan was to make a quiche-like filling but after seeing what we had on hand in the fridge I decided to go for a layered roast veggie and tofu ricotta filling, akin to the flavors and layers of lasagne, sans the pasta sheets. Point is, this potato crust idea could work for a variety of fillings. I think a fully encased veggie pot-pie filling would be yummy and beautiful with a crust of crispy potatoes on top. 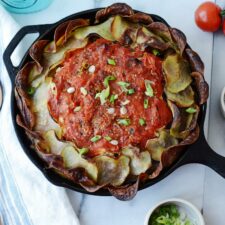