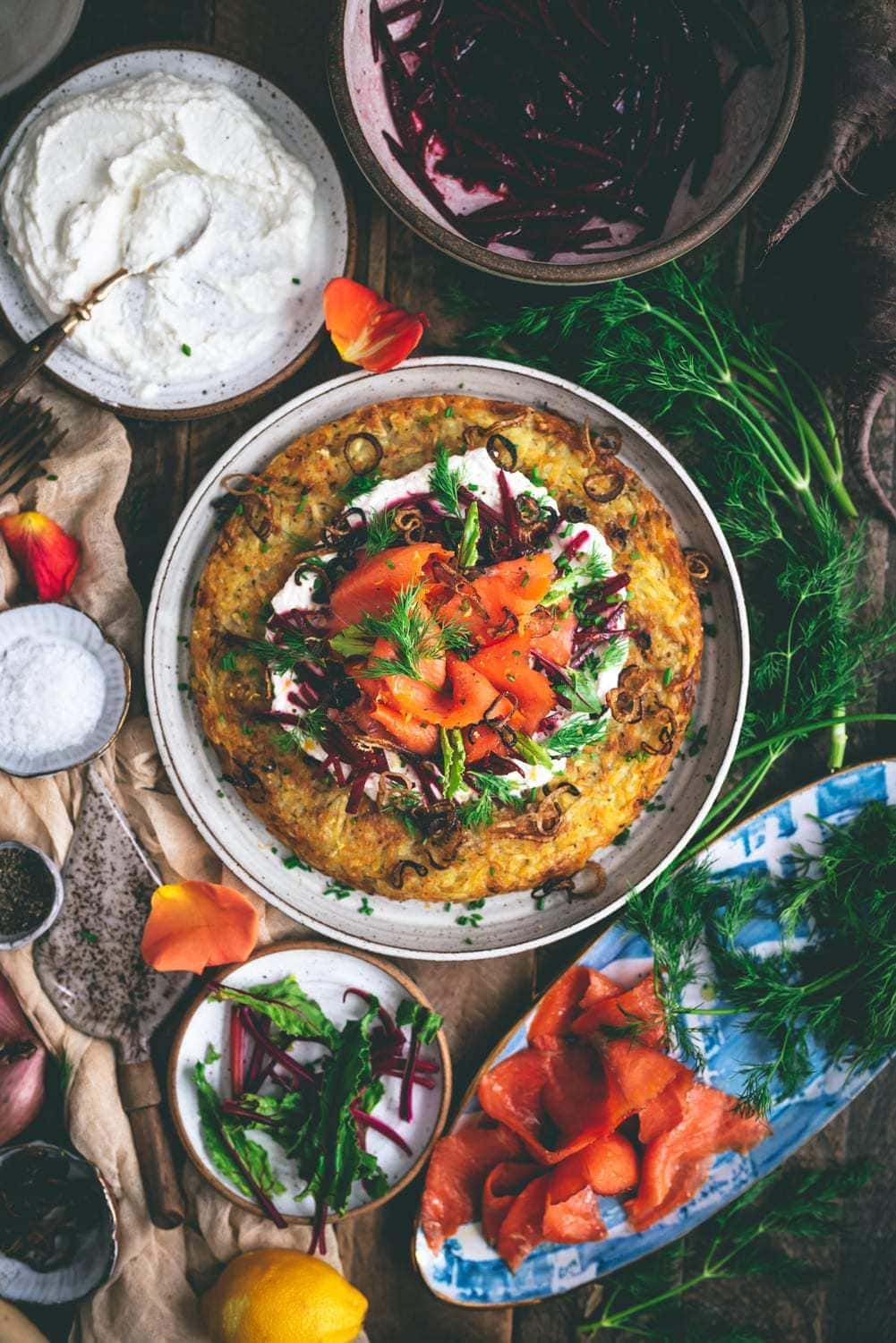 What is a Rösti?

Rösti is a popular Swiss dish of pan-fried grated potatoes in the style of a fritter or pancake. Röstis are similar to potato latkes in that they both are types of potato fritters made from grated potatoes but differ in that röstis are made from potatoes only with no added fillers like potato starch or eggs. They are generally round in shape as they mold to the pan that they are cooked in. 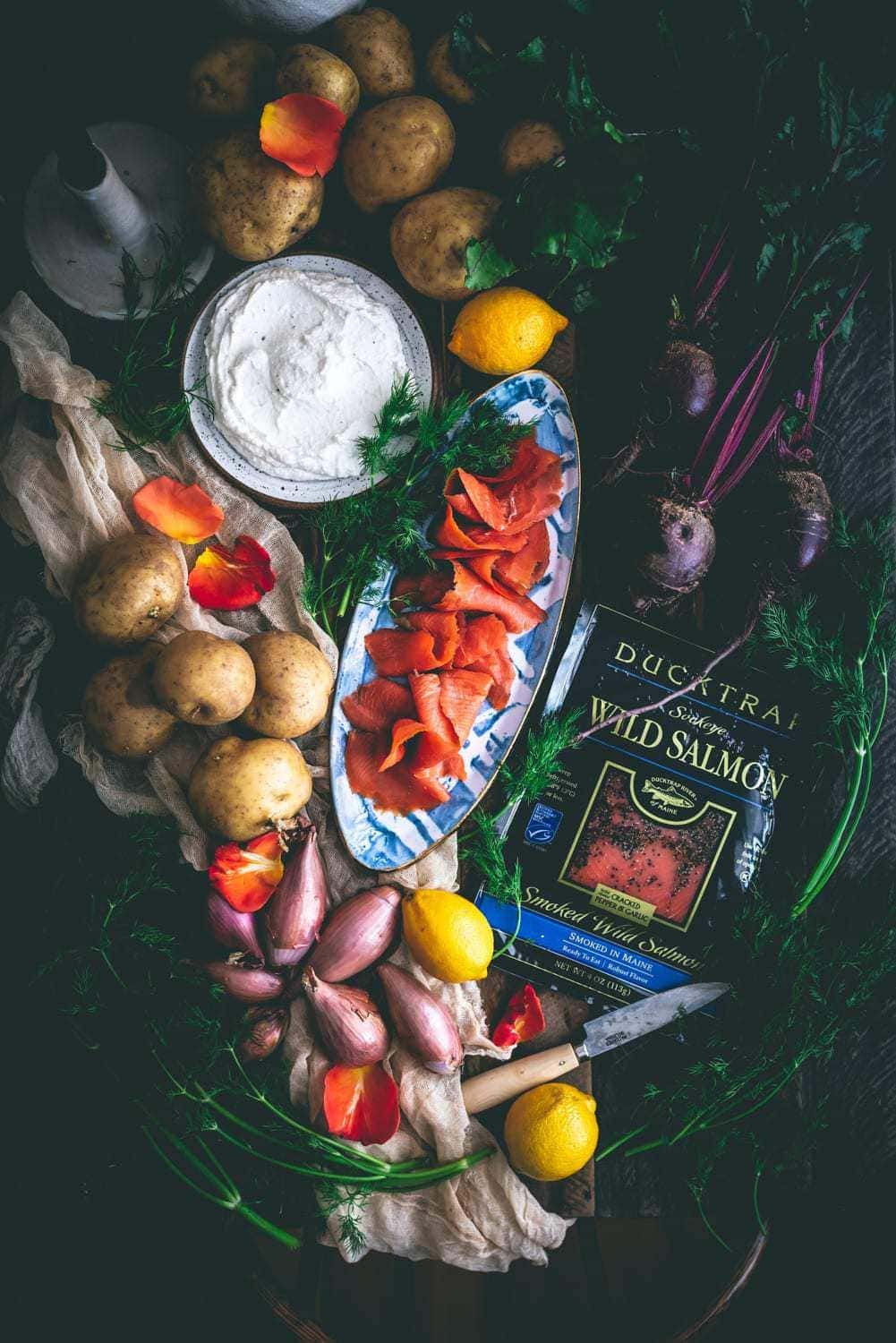 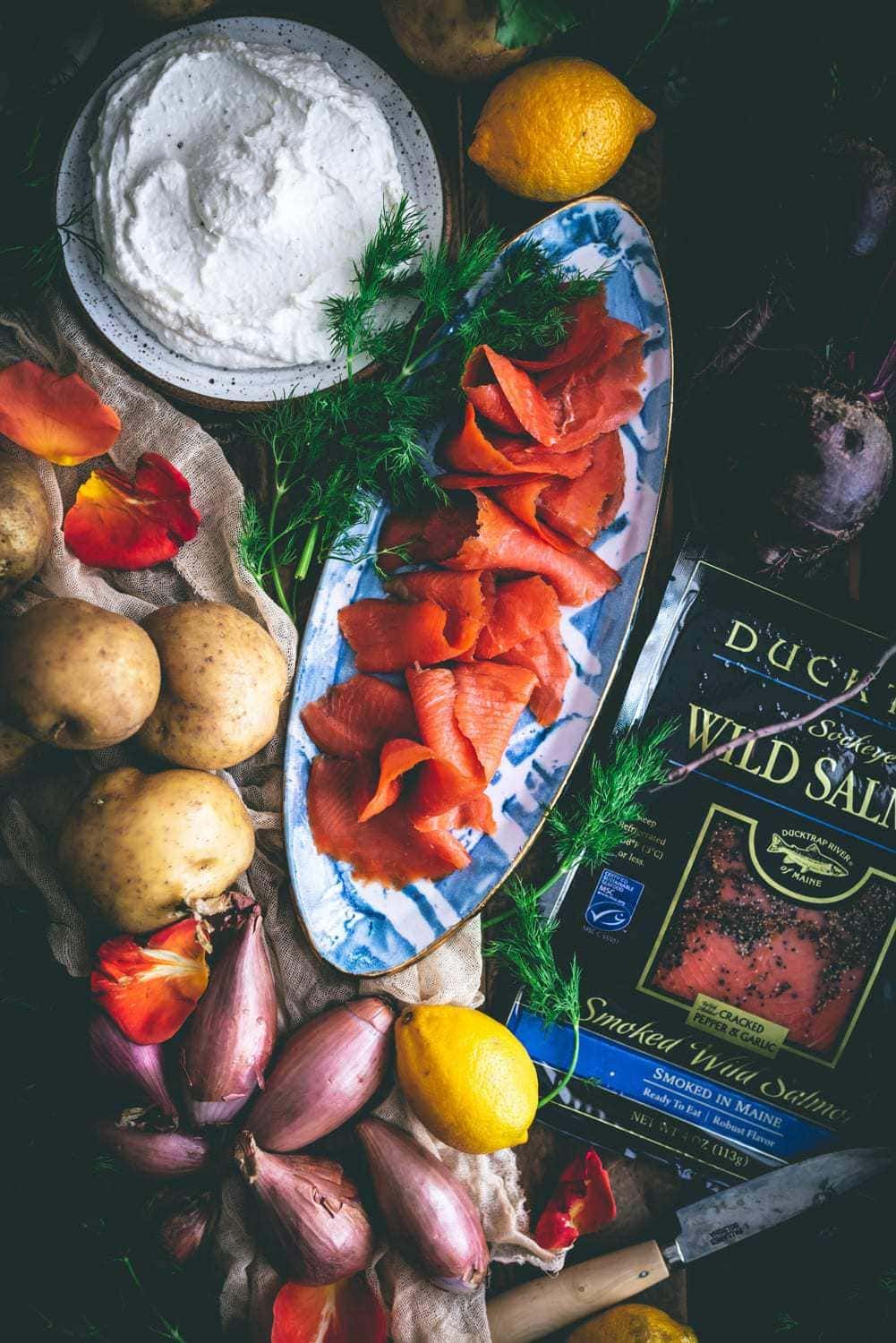 The Best Potatoes for Rösti

Starchy and dry potato varieties like russet and Yukon Gold are best for making a rösti. Traditional Swiss rösti is made with parboiled potatoes that have been chilled overnight in the refrigerator, which helps preserve the potatoes' texture and keeps them from becoming mushy when grated. Parcooking the potatoes also helps ensure that the potatoes will be cooked through at the same time that it takes to form a nice crispy crust on both sides of the rösti. If you're in a pinch and short on time you can freeze the parboiled potatoes for 30 minutes to cool them down quickly. The potatoes will also be easier to peel and handle after they are cooled completely.

There are lots of recipes on the web that use grated raw potatoes, which is not the traditional Swiss method. I do not recommend using raw potatoes for this recipe because the rösti will take longer to cook and will probably have burned by the time the potatoes are actually done cooking. Always parboil the potatoes first and you will have better success with making a rösti. 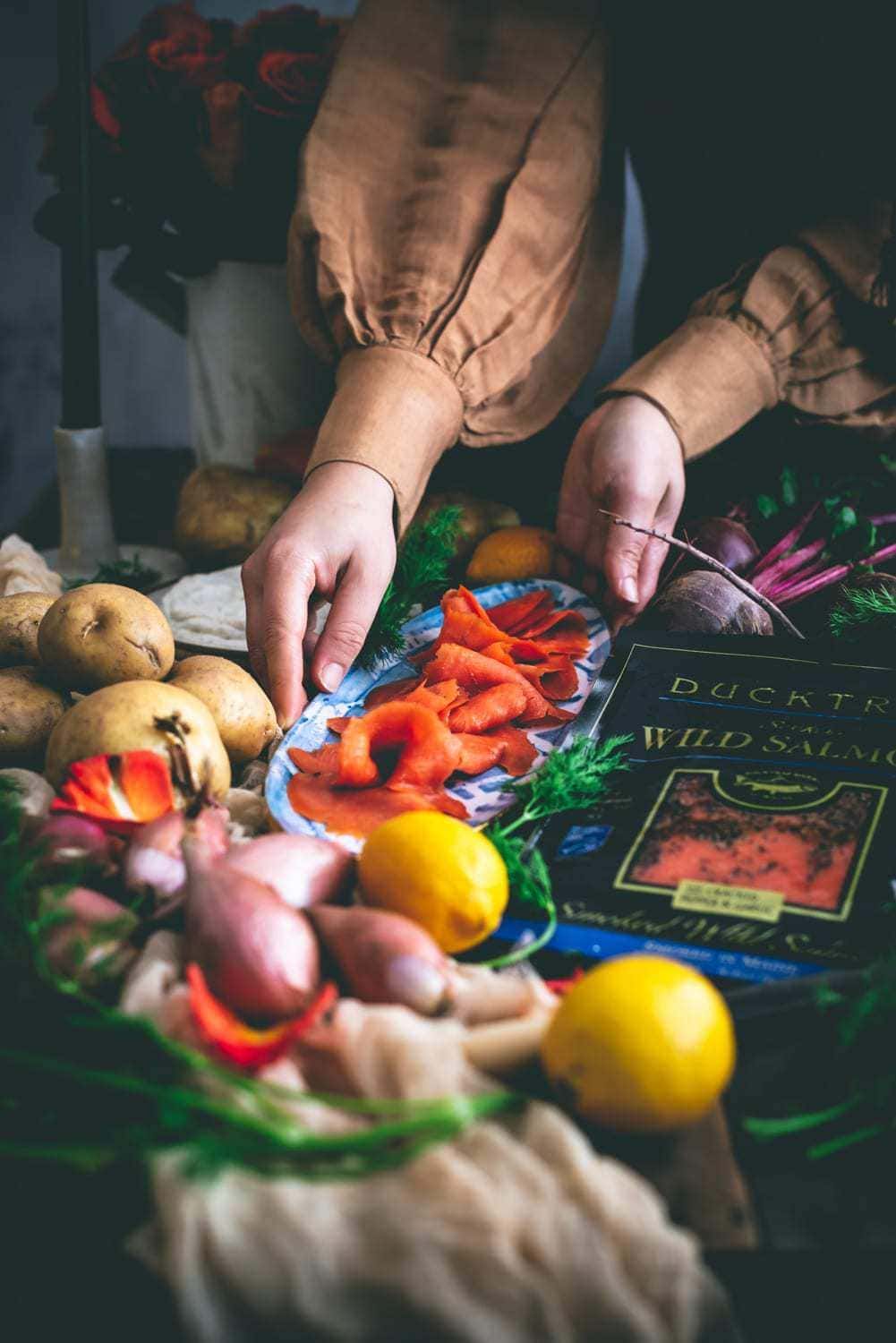 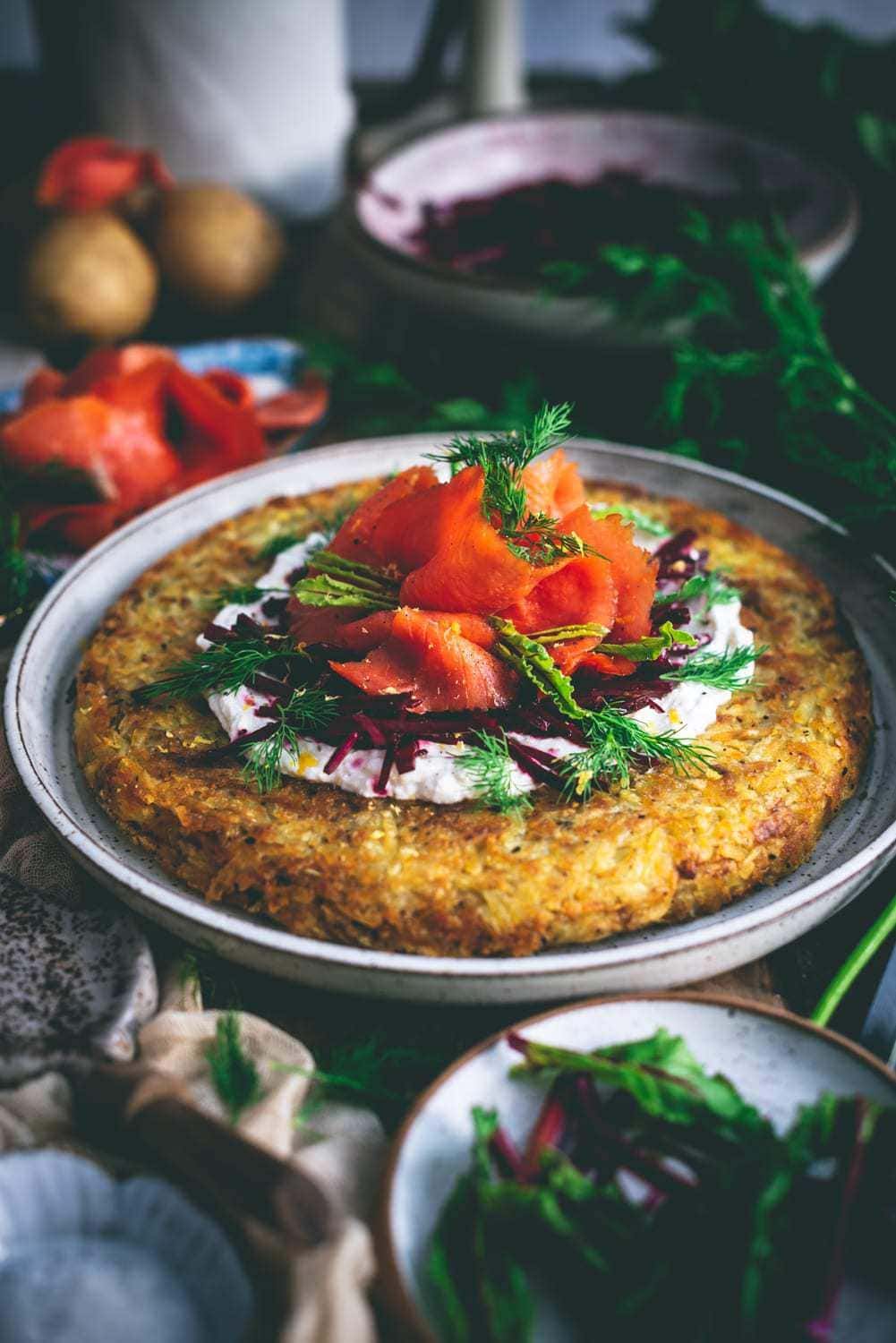 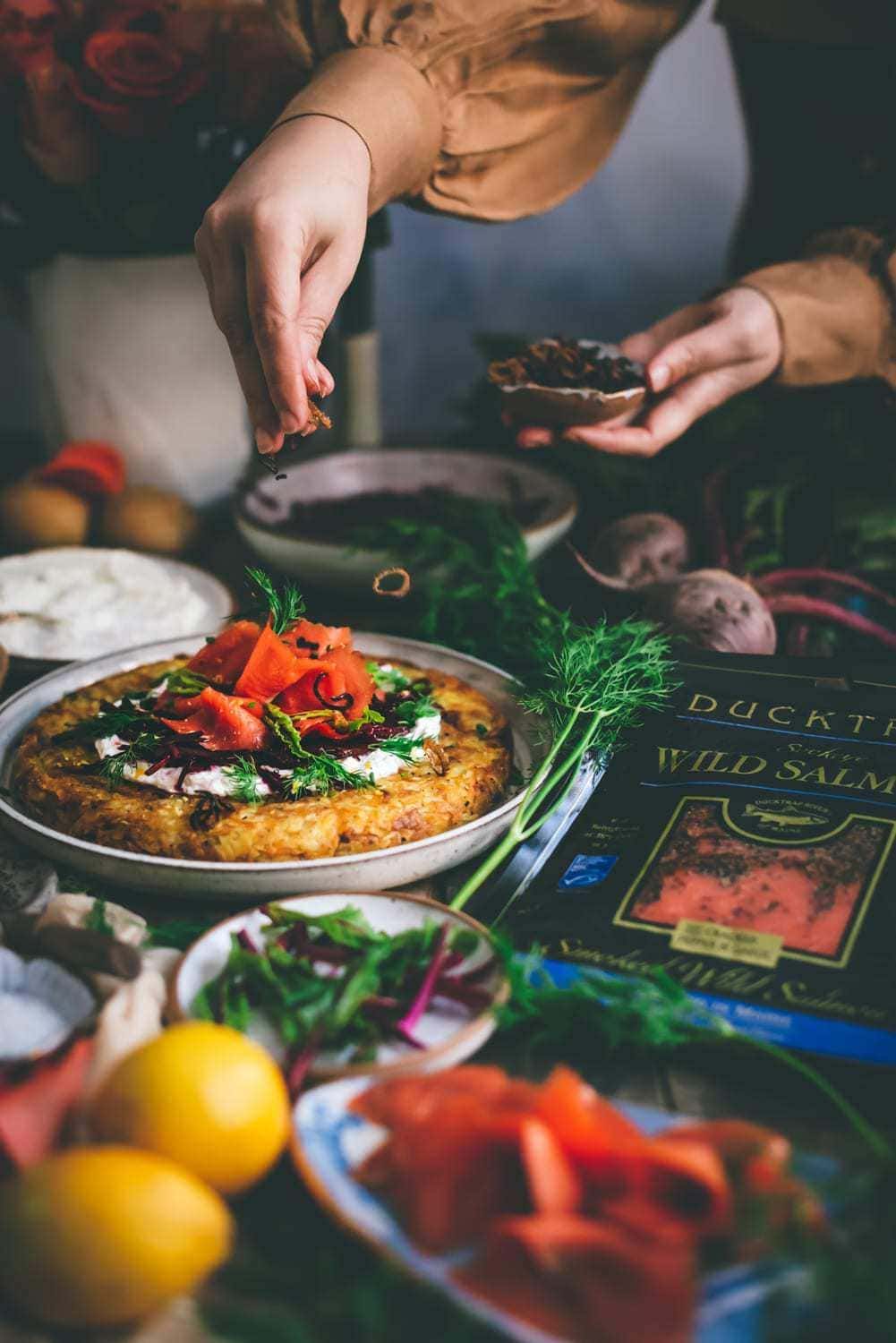 Knowing When to Flip a Rösti

Knowing when to flip the rösti during your first attempt at making one can be a little daunting and tricky. Since all ranges are different it's important to know the heat level settings of your stovetop. Maintaining a constant medium-low temperature will help to ensure that the rösti is cooking evenly and forming a nice crispy crust on the bottom. Using a cast-iron skillet will help maintain an even cooking temperature as it is made of a heavy bottom construction with a material that retains and conducts heat evenly.

You may have to adjust the heat of your range as the rösti cooks. If you feel that is it cooking too fast and may burn then lower the heat a bit and vice versa raise the heat if you think it isn't browning at all. It should be ready to flip after about 10 minutes of cooking at a constant medium-low temperature. The easiest way to flip a large rösti like the one in this recipe is to place a plate roughly the same size as the skillet upside down over the rösti. Then while holding the plate to the skillet flip the skillet over with your other arm so that the rösti is now cooked side up on the plate. Then slide the rösti, still cooked side up, back into the skillet to cook the other side.

If cooked properly the rösti will come out of the skillet in one piece with an evenly browned and crispy crust. 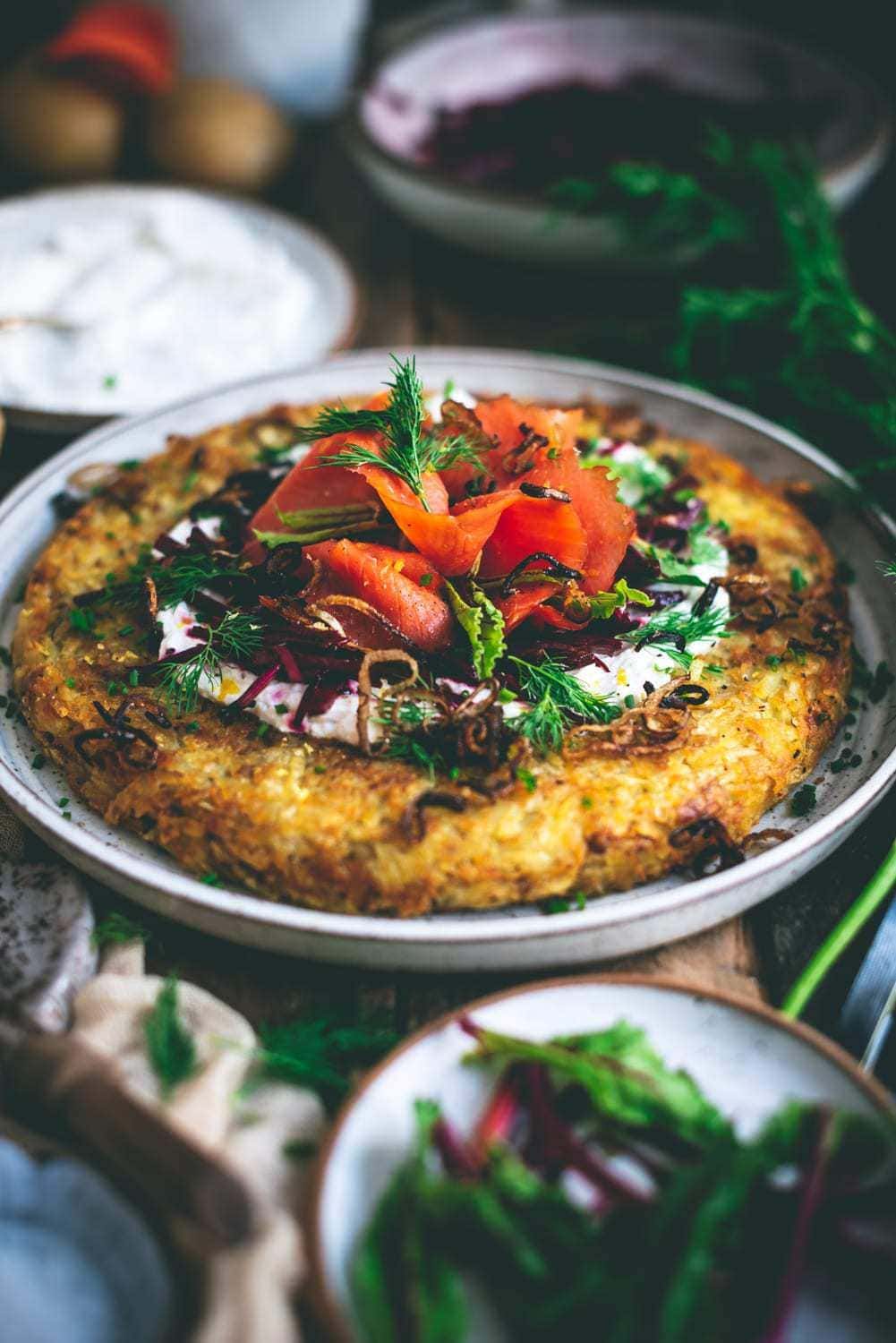 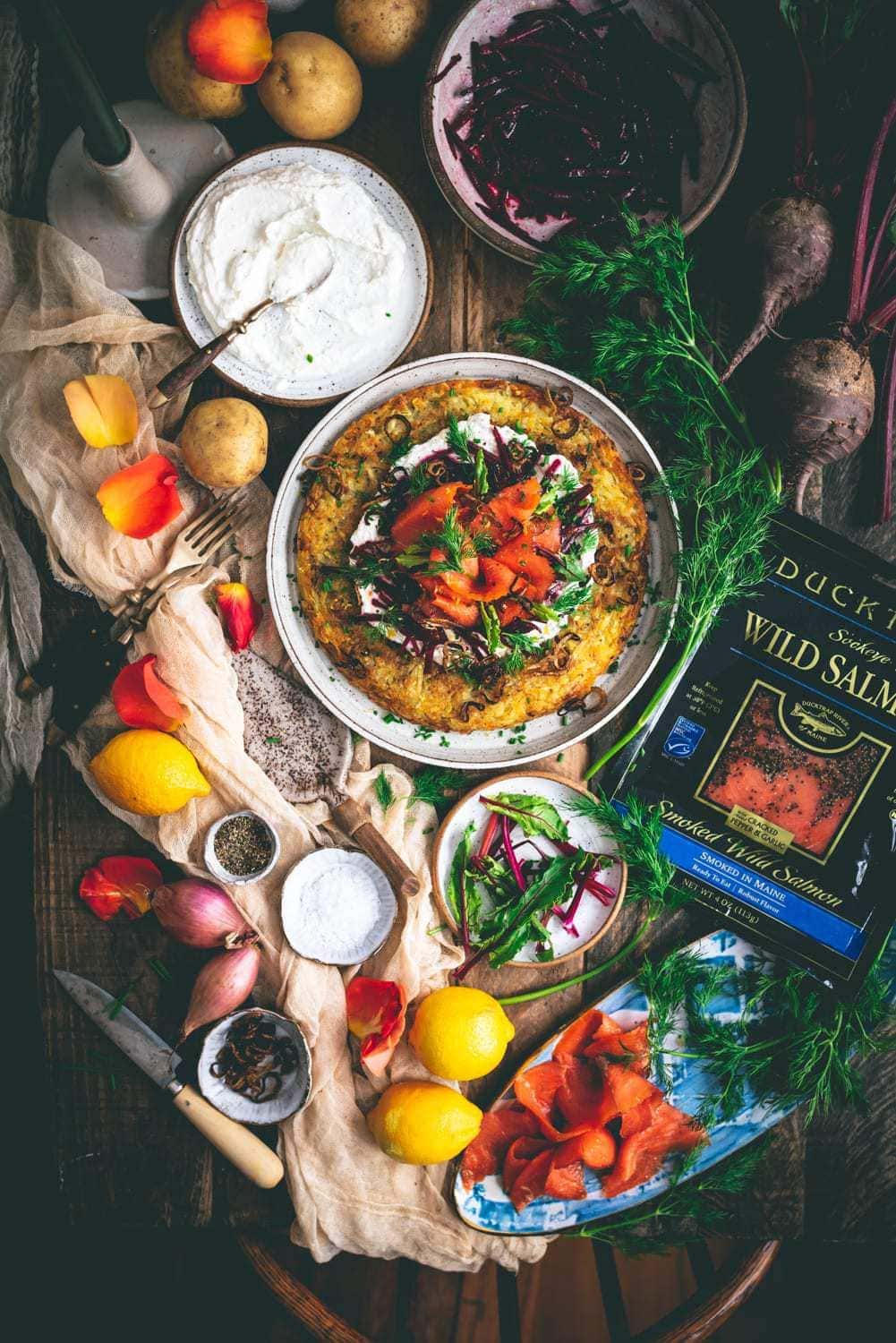 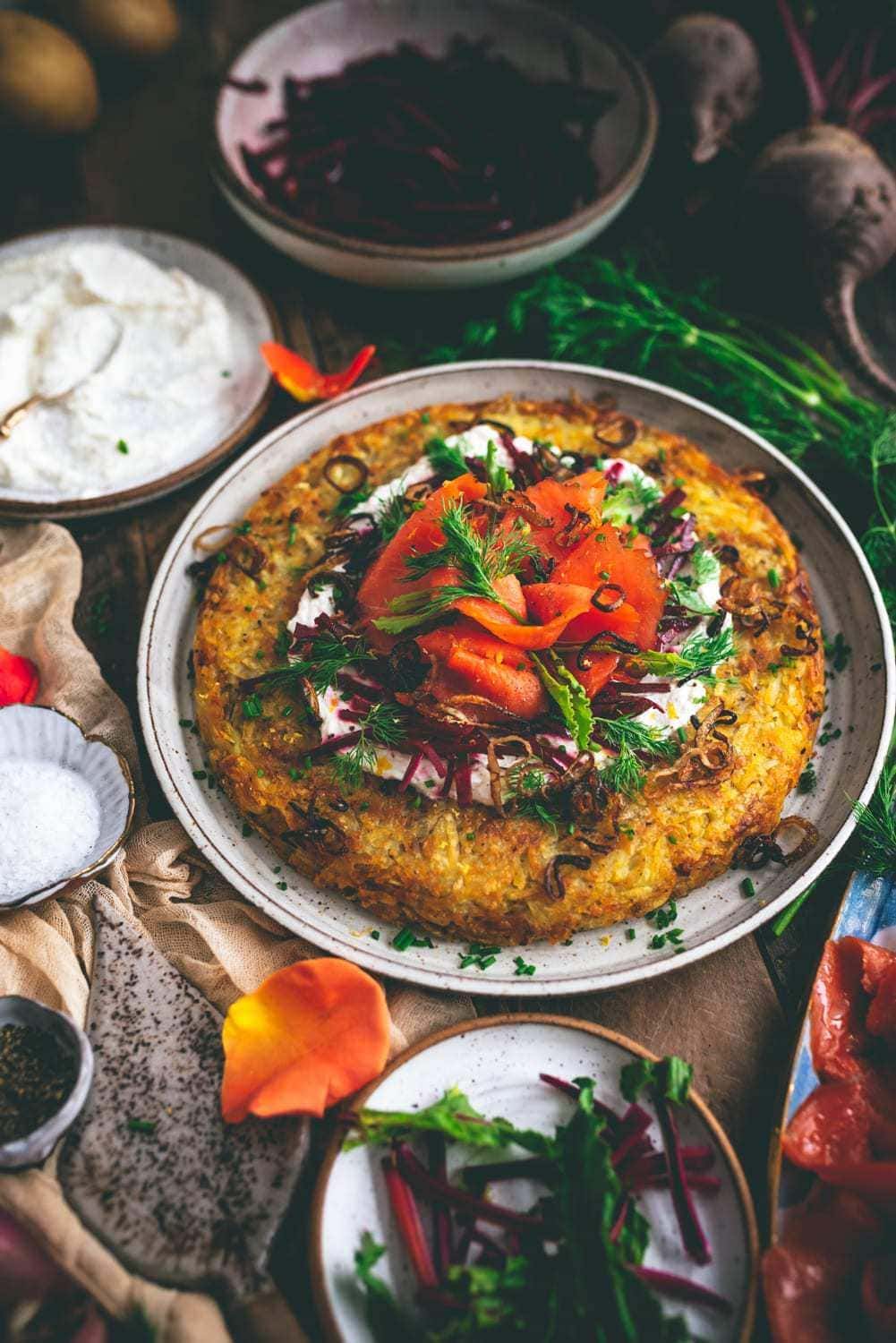 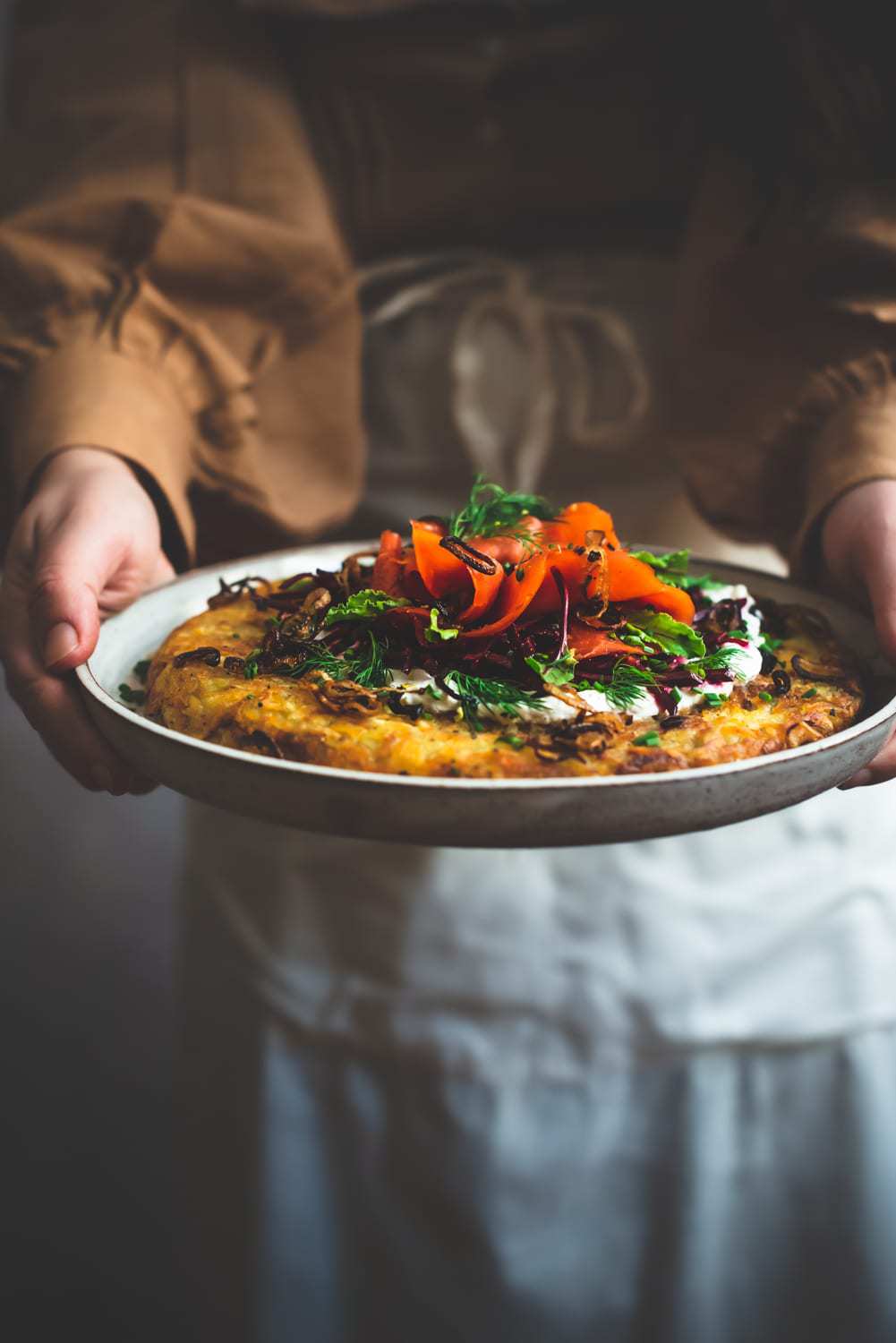 Rösti is great on its own or as a side dish at breakfast, brunch, lunch, or even dinner. At breakfast or brunch, you can top it with eggs benedict or serve it in place of hashbrowns as a side dish. It would be great with a salad for a tasty and satisfying lunch or served as a side dish with dinner.

In the recipe below I've detailed how to serve a rösti as a main course with smoked salmon, horseradish yogurt sauce, simple raw beetroot salad, and crispy shallots. This combo was so delicious and would be great for a Sunday brunch or Easter brunch option, and also would be great as a dinner for 2. Think fancy date night-in with some nice bubbly champagne or prosecco. 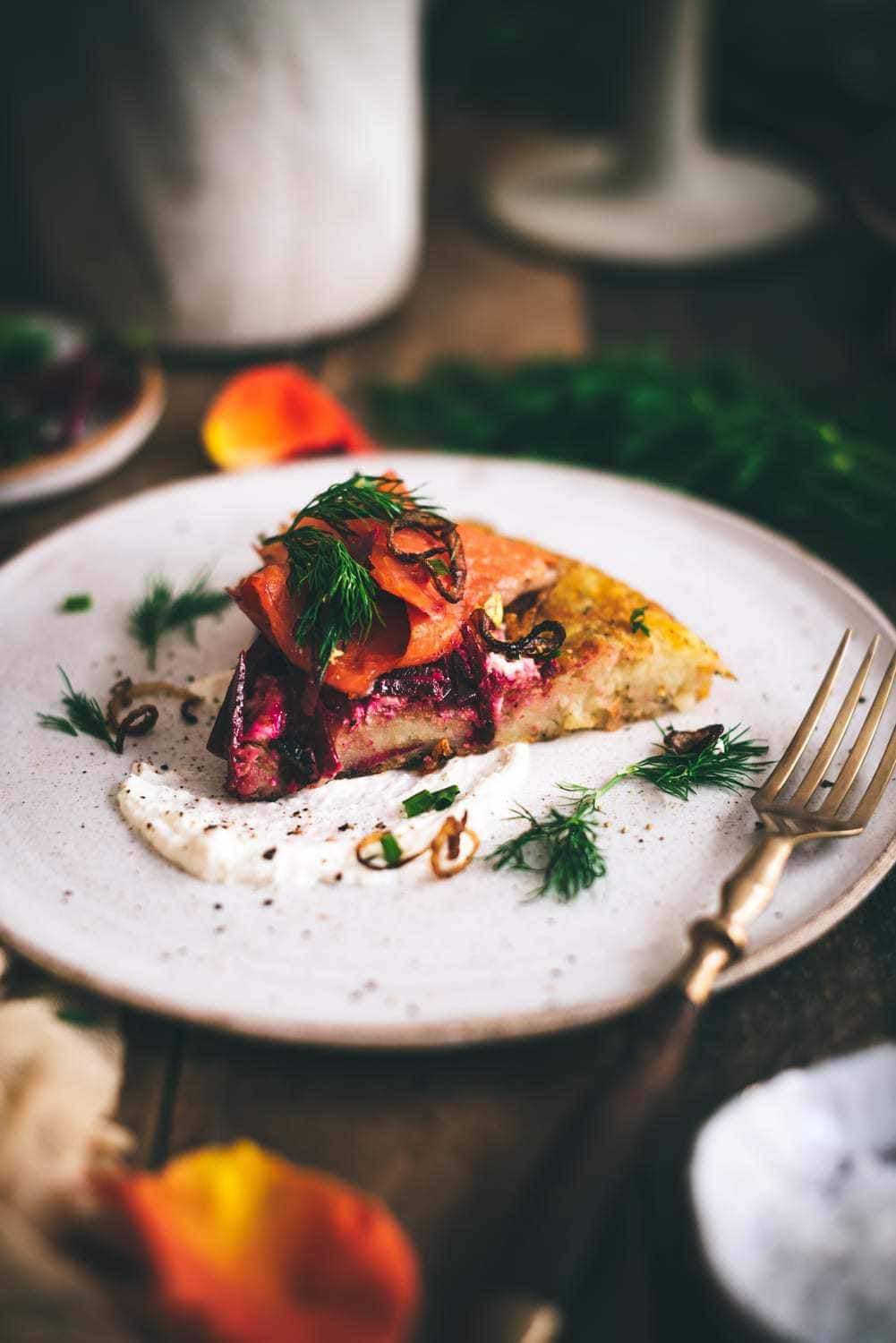 Happy cooking and good luck with flipping that rösti! You got this! 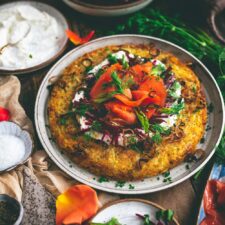