These vegan fudge brownies are indistinguishable from traditional brownies: fudgy, chewy, and they have that signature shiny crackly brownie top!

Better than the Best Vegan Brownies

I first shared my original vegan brownie recipe back in 2018 after years of trying to create a vegan brownie recipe that could rival traditional brownies. While I'm still extremely happy with that 5-star reviewed recipe, I wanted to see if I could make vegan fudge brownies that were even fudgier, a little thicker and could be made without any special equipment. That's right, these new and improved vegan fudge brownies are made in one bowl and only require a bit of hand whisking - no mixer required!

When I started developing a vegan brownie recipe I wanted it to be as close to the traditional brownies I grew up eating. These aren't healthy brownies, they are made with sugar, vegan butter, chocolate, and flour, and aquafaba is used to replace the eggs.

There are many vegan butter alternatives on the market now. In vegan baking I often use Country Crock Plant Butter these days. I used to used Earth Balance Buttery Sticks and both options will work well in this recipe. There are also culture and European style vegan butters that will work perfectly in this recipe. Oil such as coconut oil or olive oil will not work the same as butter and will result in a very oily brownie, so I only recommend vegan butter for this.

Any vegan-friendly chocolate can be used in this recipe. I prefer 70% dark chocolate. Most dark chocolate is dairy-free so just be sure to check the ingredient label.

Vanilla extract brings out the flavor of baked goods, especially anything chocolate flavored like these vegan brownies. Don't skip the vanilla! Vanilla extract can be replaced with vanilla paste or the seeds scraped from a vanilla bean. Espresso powder is optional but it brings out the flavor of the chocolate. I like to keep little packets of instant espresso powder on hand in my pantry for using in my chocolate flavored bakes.

Aquafaba is the leftover and reduced cooking liquid from chickpeas or the reserved liquid from canned chickpeas. It is thick and gelatinous and can sometimes replace eggs in recipes. For instance, aquafaba can be whipped into meringue just like egg whites.

Aquafaba is the secret ingredient to achieve that elusive shiny crackly brownie top that most vegan brownie recipes are lacking. There is no need to whip the aquafaba and sugar first before adding the other wet ingredients, but it is important to whisk the wet mixture for a full 2 minutes to get a shiny top o

How to Make Vegan Fudge Brownies

First, preheat your oven to 350˚F/175˚C then grease and line an 8-inch square pan with parchment paper, making sure to grease the top of the parchment paper as well.

Add the chocolate mixture, aquafaba, sugars, vanilla and espresso powder tot he a mixing bowl and whisk everything together vigorously for a full two minutes.

Sift in the cocoa, flour, baking powder, and salt and stir everything together with a rubber spatula to form a thick and sticky vegan brownie batter.

At this point stir in any mix-ins like walnuts or mini chocolate chips and save some for the top.

Spread the vegan brownie batter into your prepared pan with a rubber spatula. If you added mix-ins sprinkle the top of the brownie batter with the mix-ins you saved.

Bake them at  350˚F/175˚C for about 20-25 minutes until the top is shiny and crackly and a toothpick comes out with moist crumbs.

Cool them completely in the pan on a cooling rack. Lift the brownies out of the pan with help of the parchment paper overhangs then cut them into 9 squares and enjoy!

Since these brownies are made in just one bowl by hand, sifting the dry ingredients together into the bowl ensure there are no lumps of cocoa powder or leavener and makes it easier to combine the dry and wet mixtures evenly.

It can be especially hard to judge the doneness of brownies because they are gooey and fudgy. If you overbake them they can dry out and become more like cake in texture. You can tell when they are ready when the top is shiny and the edges are slightly puffed up and a toothpick comes out with moist crumbs. All ovens are different so test them at 20 minutes especially if you want extra fudgy brownies. In my oven, they are ready at about 22 minutes.

Aquafaba is the leftover and reduced cooking liquid from chickpeas or the reserved liquid from canned chickpeas. It is thick and gelatinous. Read more about and learn how to make your own aquafaba from scratch here.

Can these vegan fudge brownies be made gluten-free?

Yes, to make a gluten-free version of this vegan brownie recipe simply swap the all-purpose flour with an equal amount of 1-1 gluten-free flour like Bob's Red Mill Gluten Free 1-to-1 Baking Flour.

Can they be frozen?

Yes, these can be frozen after they are baked. Once they are cooled and sliced, flash freeze the brownies on a sheet pan then transfer them to freezer-safe bags. They will keep frozen for about 6 months. Thaw to room temperature to enjoy.

What mix-ins would work well in this recipe?

If you like to add things to brownies feel free to add in mini chocolate chips or chocolate chunks, chopped walnuts or other tree nuts, or dried fruit like dark cherries or raspberries. I would add ½ cup of mix-ins to this recipe and save some to sprinkle on the top of the brownies. This brownie base is also great for swirling in vegan cheesecake filling or peanut butter into the batter before its baked.

For more delicious vegan chocolate desserts check out these recipes:

If you made my Vegan Fudge Brownie recipe I would love to hear your feedback! Please leave a star-rating review of the recipe and let me know what you think in a comment below. This small act is a great way to show your support for the food blogs you read and love.

Please tag me in your photos on Instagram so I can see your creations. I might miss it if you only tag me the caption because those notifications fall off quickly, but I can always find it if I’m tagged in the photo itself.

These extra fudgy chocolate vegan brownies are indistinguishable from traditional brownies: fudgy, chewy, and they have that signature shiny crackly brownie top. They are also made in one bowl without a mixer! 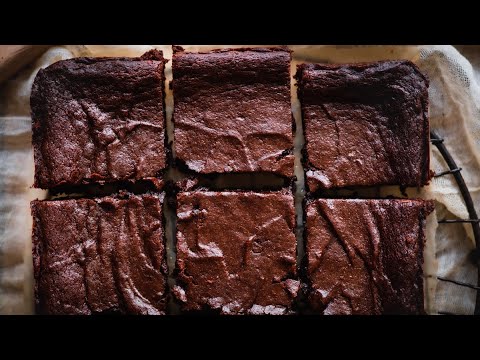 Aquafaba is the leftover and reduced cooking liquid from chickpeas or the reserved liquid from canned chickpeas. It is thick and gelatinous. Read more about and learn how to make your own aquafaba from scratch here.

I used County Crock Plant Butter sticks in this recipe.

It can be hard to judge when brownies are done baking. All ovens are different and can be finicky and have hot spots so it is best to use an oven thermometer to set the temperature accurately. In my oven, they were perfect at 22 minutes. Overbaked brownies will be dry and cakey instead of fudgy in the center.

This post contains affiliate links to ingredients and products relevant to this recipe. If you choose to purchase linked products I would earn a modest commission, which helps offset the costs of keeping Fare Isle going. Learn more about my affiliate policy here. Thank you for your continued support!

Welcome to Fare Isle! I'm Kaity, a photographer, recipe developer, food stylist, and private chef living simply with my family on the island of Nantucket, ... END_OF_DOCUMENT_TOKEN_TO_BE_REPLACED